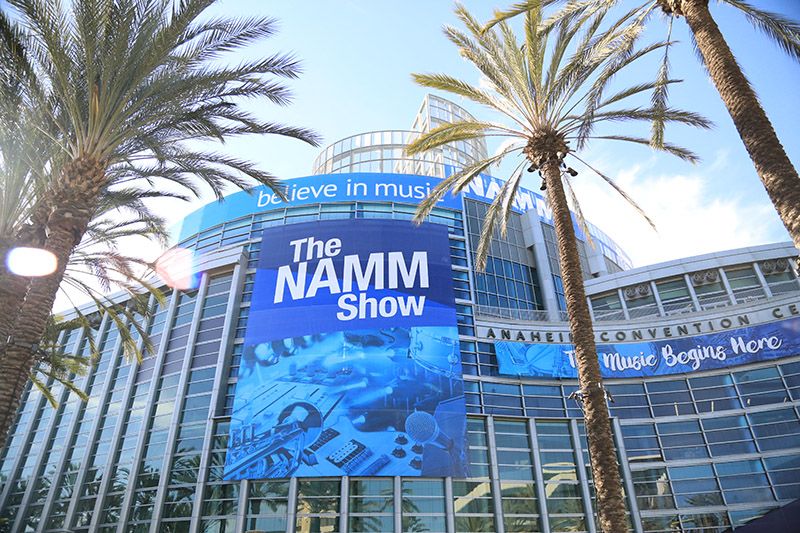 If you’re a music lover then you’ve most likely heard the word NAMM at some point in time, but hearing about it and actually being there are two completely different playing fields. This year the Audible Reality team was fortunate enough to experience this monster exhibit for the first time and with a record-breaking 115,000 in attendance, it was safe to say this year was the biggest to date! NAMM is an industry focal point housing the musicians and music products of the world. Making its start in 1901 NAMM — which stands for the National Association of Music Merchants — is a trade organization for the music gear industry. This is a show where the world’s best vendors and manufacturers in music come together under one very large roof to announce anything and everything new they have been working on that year. So just how big is that roof you ask? Well not including the surrounding area or outdoor stages, the exhibit halls at NAMM alone are about 615,000 sq that’s the equivalent to 4 full sized Targets packed with nothing but music gear and instruments…so yeah pretty huge. NAMM is a way for brands to be seen by the press, allow consumers to demo products, give out loads of freebies and create an all-around hype for their business. For some of these businesses, the NAMM Show will be the only physical place their product has been seen and demoed which creates major FOMO if you’re not in attendance.

Over the years the show has increasingly strengthened the music, sound and event technology industry. Essentially acting as Christmas that came late, NAMM is a crossroad production bringing together music professionals, producers, musicians and engineers to see, test, and talk about their favorite thing, NEW STUFF! This year we were blown away by the amount of new tech the expo unveiled including new releases such as the Acoustasonic Telecaster from Fender, the  Volca Modular from Korg and the new AvantGrand N1X by Yamaha that would have you purchase a ticket for next year before the weekend was even over. As for shows, hundreds of musicians took to NAMM’s five stages, surrounding the expo with nonstop performances. Ed Sheeran was there debuting and testing out his new line of guitars with Lowden. Fred Armisen was at the Ludwig booth showing off his celebrity set of skills on the drums. Buckcherry was in attendance signing autographs to promote their upcoming EP Warpaint. Other big names such as Bruce Watson, Stevie Wonder and Sinbad were also there hanging out away from the public’s eye in the shows green room.

Being at NAMM for the first time is a feeling like no other, from the buzz, the crowds create before you’ve even entered the show, to the nonstop sound of music coming from every direction it really was just a magical weekend for the team at AR.  By far though the best part about being at the NAMM Show was experiencing it with you, the consumer. Allowing you to see and test the products we’ve worked so hard to create was exhilarating. Seeing the immediate understanding on peoples faces as they came to our booth and demoed our platform was inspiring. I said it earlier in this article but the more I talk about it, the more I believe NAMM really is comparable to Christmas. The businesses are the “parents” while the consumers are the “kids” and I think every parent can attest that seeing happy kids on Christmas morning is truly what it’s all about. (The “kids” definitely lucked out too) Check out our recap from NAMM 2019 below.